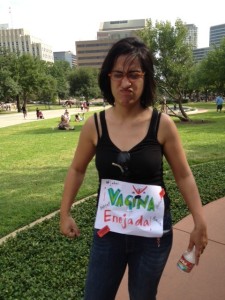 The Violence Against Women Act (VAWA) is being contested by Republicans because it offers protection to Native Americans, lesbian, gay, bisexual, transgender Americans, and immigrants. They have made provisions to get rid of support for any people who fall within these categories and tucked them into the bill which has the backing of the full House leadership. It is headed for a vote in the Judiciary Committee tomorrow, Tuesday 5/8/12.

I have to ask: Do we want all of the people in our country to be safe from domestic/intimate partner violence and have measures in place to assure that safety?

The world we live in is a world that does not, in most places, afford equal rights for women. It is a world that objectifies and sexualizes women. And it is a world that not only permits violence against women, but in some places, mandates it and almost everywhere encourages it.

The United States of America is in the context of a world that does not view women as equals. Women who are citizens of this nation are at risk of violence for the simple fact that we are seen as less than or second class citizens. Women of color, transgender women, disabled women, and lesbian women are at an even greater risk because of those identities.

And immigrant women who don’t have citizenship? They are also at greater risk.

If an immigrant woman is in a relationship with someone who is a citizen, that person ultimately has power over them. So even aside from the gender privilege, just starting out, there is a power differential in the couple because of citizenship.

For a relationship between a man citizen and an immigrant woman, where there is violence by the man toward the woman, she is often led to believe she has very little recourse.

I speak fluent Spanish and have worked, as a clinical social worker, with hundreds of Spanish speaking immigrant women over the years, many of them dealing with domestic violence and rape. Immigrant women who are battered, are often told that if they call the police, they will be deported. Some are told that if they leave their homes, they will be deported. They may be told that they can’t do anything without their partner who is a citizen. They may be told they will never see their children again. Their immigration status is often held over their heads.

Many people think that when you get married you are automatically a citizen when in fact it is a long drawn out process that you must apply for.

Immigrant women who are battered often don’t know that there is anything they can do or that they have any rights at all. In the past, they have had some options with the Violence Against Women Act (VAWA). Now, Republicans are pushing for immigrant women to have none.

In 1994, VAWA created a “self-petitioning” process that allows immigrant women who are married to U.S. citizens to confidentially apply for protected immigration status on their own so as not to tip off the violent husband that they are thinking of leaving. Protections for immigrant women have been strengthened in subsequent reauthorizations of the bill. The Republicans want to take that away because they say they think women are taking advantage of the law to get citizenship. There aren’t that many visas given to victims of domestic violence as it is, but not only do the provisions in the bill not add more, it virtually takes those away and it takes out confidentiality.

By notifying their husbands that they are applying for citizenship, immigrant women are not only put at greater risk for violence, they are clearly identified as their husbands’ property.

Without the options and protection afforded by VAWA as it is, undocumented victims will be discouraged from working with law enforcement officials and therefore also from leaving perpetrators of violence to go free. These provisions would eliminate any path to citizenship for victims/ witnesses who cooperate with police on criminal cases.

The provisions are tucked into a bill that reauthorizes the act, and the bill has the backing of the full House leadership, and is headed for a vote in the Judiciary Committee  tomorrow 5/8/12.

More and more women’s rights are being taken away. More women are being hurt and are at risk for more violence. This is my country too. To answer my own question: I do not want the United States to continue to promote violence against any women, no matter who they are. I want my country to take an active stand to protect the people here.

The GOP‘s War On Women continues to rage on. They must be stopped.