As a part of a contest, my partner and I spent yesterday evening decorating our balcony for Halloween trying to get $100. off our rent. Still haven’t gotten the results, so… we’ll see. Either way, it was fun and I’m using part of our scene in this post. I couldn’t quite capture it all in the picture because we’re on the third floor and it’s a long way up. But, it’s a scene with two pumpkin head witches sitting together at a table with another cut off female pumpkin head on the table between them with a knife at the base of the cut off pumpkin head. Note: the title of this post. 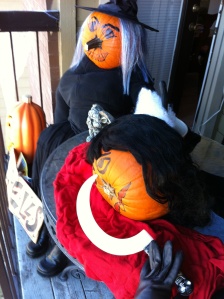 Don’t cut her head off.

It’s so easy to do. Especially with this holiday. On Saturday I heard someone call it “Slutoween” and they went on to say Halloween has become a day for women to try to be sexy by dressing up as sluttily and trashy as they possibly can. There seems to be some confusion in the society about how women should dress. And somehow it’s never up to us.

As a woman, I feel we are encouraged to look sexy and appealing to men and if I don’t look that way, I’m not playing the game and may not be successful. Which reminds me, years ago I was in the Peace Corps in Costa Rica. At the time, I didn’t shave my legs. The senora of the house I lived in praised me and told her daughter who was five years younger than me to look at me as an example: I didn’t shave and that was natural and beautiful. So, in a different culture having non-shaved natural legs was beautiful. My own mother was horrified I didn’t shave and frequently made that known. When my sister got married, she and my mother made me shave in order to be in the wedding. It wasn’t okay to be my own natural self as a woman, I must be smooth and sexy and appealing to men. Even if it’s not to be appealing to men, my mother said my hairy legs were gross. Gross? Really? It’s hair.

Even women are taught to believe and feel certain ways about the way women should look and put other women down or pressure them until they conform- this is how the system works so well.

Men put women down. They call us sluts or imply that we are if we are dressing in a sexy way, which people who seek to profit from Halloween encourage us to do, we are trashy. Slutoween. But women also put women down, call other women sluts or trashy or maybe even call Halloween “Slutoween.” When we do that, we are insulting ourselves and women in general. We are being the queen in Alice in Wonderland who yells “Off with her head!”

Don’t be the one yelling “Off with her head.” Be the one saying, “She’s fine as she is and can dress how she wants.”